Time for pool is precious.

Guess that's the bane of any player.

I've been playing some straight pool lately and really enjoying it.

Brad and I have split so far 2 games each.  His wins are by more than mine but in my wins I have played better.  Have yet to put together a decent run. 12 is my high in competition. The transition ball has been my problem lately.

I would like to work on this game until I can run 100.  Lofty, but entirely possible and mostly mental.  Should be an interesting challenge.

My JD cues however are great and I look forward to the next two.  Looking into a JB CASE too - complete custom type.  Should be fun process.

I haven't updated here in a while.  Guess time flies when you are having fun.

Headed to play in a Short Rack 8 ball tournament.  First tournament since last April's State ISPA tournament.  Almost the first time picking up a cue since then.  Let's just hope for a reasonably decent showing. 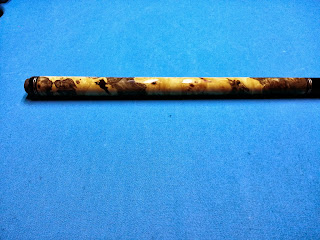 Also a new player from JD Cues -- still breaking it in, but I am liking the feel lately. 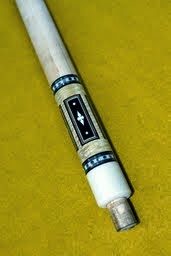 Well, I guess it's been a while since I last blogged... I guess it hasn't been as big an issue and my pool playing has been curtailed more than usual.

In the spring of 2011, I placed 7/8th in the ISPA 9-ball tournament, didn't cash in 8 ball and our team -- Pocket This - Brad, Brian, Tom and the other Matt placed 2nd in the open team tournament after winning the bracket, getting double dipped by the team that returned from teh backside.  At any point in the final two team matches, had I made the two outs I was working on, we would have won the tournament.  Hmm -- it's key to play well in key times. :-)

Fall league has gone well and my stats are very strong.  My Carmeli is playing well and I have a new Olney that will be delivered next weekend.  A nice looking cue, but will probably sell it to fund the high end Olney that he has in the pipeline.  I hope to keep the 6-pt Purple heart cue and add it to the collection and hopefully one of my kids will find enjoyment in the game.

Summer is here once again.

Team was 7/8 at ISPA -- Not very good finishes for me. Didn't play well in singles - what-so-ever. VNEA was a crap shoot, made some great games during team play to help us into a fairly decent finish Sunday morning.

Played Theo Sunday night (Mem. Weekend) and won two sets. Race to 4; 8 ball -- I got all the breaks. We went hill-hill first set and back/jacked it and I won the second set. 4-2. It was 2-2 i believe when he rolled the 8 ball after pocketing a stripe and it fell in the side. 3-2 me. It was crazy because the window to get to the side pocket was NARROW and an off angle. Luck, Karma, Destiny -- Freaky any way you call it.

Played a lot of 1 pocket with Ray that night as well. Even is probably no longer good. He banks too well and the second half of the game is usually his. 10-6 went my way 4 x in a row, so probably 9-7 in the future -- Maybe just 9-7 on my breaks first.

Looking forward to some summer league to get me playing again regularly and making the weekly tournaments when I can. traveling this summer probably doesn't involve a pool excursion as well. Bummer.

If you need a good snooker table, I know of a place in the NW corner of Nebraska. LOL

Taking off tomorrow early for the IOMA tournament. Here's hoping for a good showing individual, some good pool and a great team showing. Better than a week at the beach, IMO.
Posted by snkr147 at 5:47 PM No comments:

As an added bonus, John Schmidt and Earl Strickland were there for a pool exhibition. All in all a pretty good night. I played a scotch match with John as my partner against Earl and another spectator. It was pretty fun. I got bad shape for John on a clustered 5/6 and he fouled the shot. Earl and his partner ran down to the nine and after the novice missed a tough 9 ball, I was left an awkward cut in the center of the 9' GCV. I lined it up very precariuosly and made the shot.

The 10 ball tournament went well -- after the double steer by Randy on the start time and actual having the tournament -- and I got entered late, after the fact. I drew Jody and lost 5-3, won 5-0, 5-1, and 5-2 on my way thru the back side of the bracket. My game with Wes was 3-2 and I missed an out. Never really recovered from that. He gave me chances but I couldn't quite capitolize like you need to with a player of his calibur.

Watched some more one pocket and enjoyed the evening rather well.

Can't wait for my Carmeli to get back -- should be any day now and possible this week.
Posted by snkr147 at 7:35 AM No comments: